Here’s one from way out in left field, Detective Tom Dillard. I’m guessing you’ve heard of the Zodiac serial killer, right? He was around while you were a cop with Las Vegas Metro PD. Maybe before, even. Back in the 60s and 70s were when he was at his notorious peak. According to some accounts, he even continued his murdering spree into the 80s. In fact, according the the account I’ll outline below, he may even have been responsible for a murder you investigated in 1987 and 1988, arrested the wrong man for, who then turned around and sued you and your department for $1 million and ended up settling out of court for $800,000. And almost 30 years later, it’s still a murder that has never been solved.

In our research on the case, we found a piece of writing online under the byline of “Goldcatcher” that tied the murder of Alexander Harris, 7, in Stateline, Nevada, to the  Zodiac killer. According to the writings by Goldcatcher, Alexander was one of his last victims. This was a well publicized kidnapping and murder in which Tom Dillard was the lead homicide detective. Alexander’s killer has never been found. And the details connecting Alexander and the Zodiac serial killer are chilling. 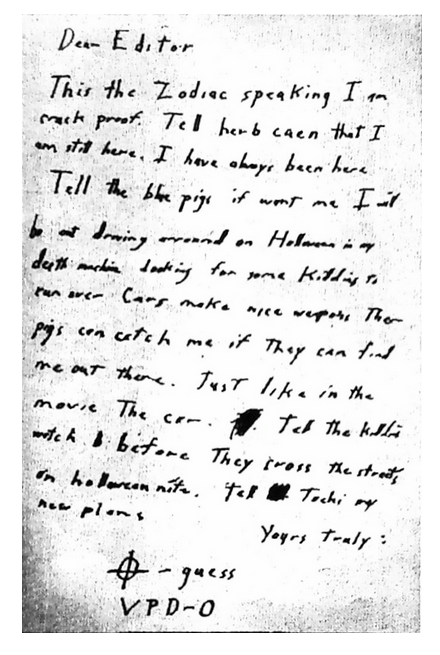 Goldcatcher has a letter he says was written by Gyke, the Zodiac serial killer (seen at right), and sent out in 1987. He’s not clear as to whom the letter was sent. Perhaps to the San Francisco Chronicle, which was covering Zodiac’s activity rather heavily and often received communication from him. In the letter, Zodiac writes in part, “Tell the blue pigs if want me [sic] I will be out driving around on Halloween in my death machine looking for some kiddies to run over. Cars make nice weapons. The pigs can catch me if they can find me out there. Just like in the movie The Car. Tell the kiddies watch before they cross the  streets on halloween nite.” And then he signs it with the symbol he had become well known for using.

Alexander Harris was kidnapped and killed at Whiskey Pete’s Casino at Stateline, Nevada less than a month after Halloween —on the day after Thanksgiving. Someone led Alexander out of the video arcade at the casino, suffocated him, and dumped his body under a trailer on the casino grounds. Howard Lee Haupt was accused of the crime and tried, and was found not guilty on all charges brought against him. The actual killer of Alexander has never been found.

On display in the lobby at Whiskey Pete’s  on the day of Alexander’s abduction and murder on Nov. 27, 1987, was a car — “the car” — the 1934 Ford “death machine” that belonged to the infamous gangsters of that era, Bonnie and Clyde. The death machine is in reference to the car that Bonnie and Clyde were killed in when they were trapped at a road block and gunned down. It’s riddled with bullet holes. And it’s still in the lobby of Whiskey Pete’s today.

The 1984 Newsweek magazine cover reference is important (left), because the cover story on March 19 of that year was on stolen children who were still missing. The cover photo was of Kevin Collins. Kevin, according to Goldcatcher’s writings relating what Gyke, the Zodiac  killer, had told him, lived near Gyke. Kevin, 10, was abducted on Feb. 10, 1984 and had been missing ever since. Gyke told Goldcatcher that he kidnapped and killed Kevin on that date because he claimed Kevin’s mother had written him a letter stating that she didn’t want her son hanging out at Gyke’s storefront anymore. Gyke apparently was teaching Kevin computer programming.

Goldcatcher said he found the magazine where Zodiac said it would be. Goldcatcher wrote that Gyke used to proclaim, “Kevin’s in heaven!”

Well, Detective Dillard — any thoughts on this one? Has the latent print that was found on Alexander’s glasses been compared to those of Richard Gaikowski’s? They’re in the FBI fingerprint database file. Sure, it’s a long shot. A really long shot. But when you have a lead, don’t you follow it until it leads to something else or dead-ends? Doesn’t Alexander Harris’s killing warrant at least a quick fingerprint comparison? Goldcatcher said for years he tried to get someone in law enforcement to listen to him seriously. Even if it’s dead end and eliminates Gaikowski as a suspect as relates to the fingerprint on the glasses — isn’t Alexander’s life worth at least that?

For more info on Goldcatcher’s writings on the Zodiac killer, go to:
http://mk-zodiac.com/InSearchofaSerialKiller.html