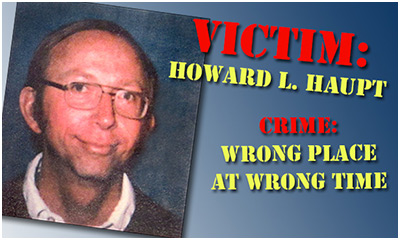 Sometimes, when you get two people together, they feed off each other in interesting, unexpected ways. That’s the case with Laurel & Hardy, Abbott & Costello, Lewis & Martin, Dumb & Dumber (had to go there — those two fictional buddies from the comedic movies), Dillard & Leonard.

Yes, Dillard & Leonard. Tom Dillard & Robert Leonard, quite literally, were partners in crime, if not comedy. While they were both working as homicide detectives on the Las Vegas Metro PD, they worked at least a couple hundred cases together. They worked some of the most-publicized murder cases in the area, including that of young Alexander Harris, 7, who was kidnapped from Whiskey Pete’s Casino on Thanksgiving weekend in 1987 and was found murdered a month later under a trailer on the casino grounds.

And when you look in hindsight on some of these cases — especially that one — you wonder how could the two possibly be convinced that the man they arrested for the crime, Howard Lee Haupt, was guilty. Haupt was tried and found not guilty on all counts, and later sued Dillard and Metro PD and won an $800,000 out-of-court settlement as a result.

Yet Dillard supposedly remained convinced that he and partner in crime Leonard pinned the murder on the right man (and “pinned” seems to be the right word here) — even after all the flip-flopping and second-guessing and oversights of identification of possible suspects by witnesses who said they saw a man of varying descriptions walking out of the casino arcade with a young boy, even after viewing poor-quality video surveillance footage that was unable to be used for positive identification, even after eight witnesses provided alibis for Haupt, even after no physical evidence whatsoever tied Haupt to the crime … Yes, Dumb & Dumber, indeed.

And there’s this detail that isn’t discussed much when it comes to identifying a suspect in this crime: There were hundreds of potential suspects who were never even considered in the case. That’s right. There were easily hundreds, likely close to a couple thousand — an estimate, but a generally agreed-to number of “some 2,000 persons” — participants and spectators in a weekend Barstow-Las Vegas motorcycle rally that also was going on at the time. Dumb & Dumber? You tell me.

You’d think that, yes, while they wanted to get to an arrest of a suspect in such a heinous crime, that they’d at least want to be sure it was the RIGHT suspect. The person who actually committed the crime. And this is just one case. Tip of the iceberg, you might say. We haven’t even mentioned Roberto Miranda. As you might expect, there will be Dumb & Dumber sequels. Stay tuned.