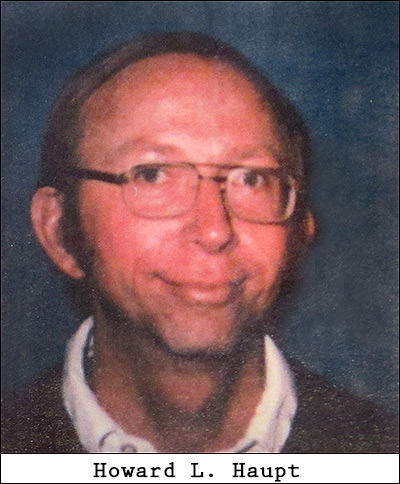 The Beginning of Haupt’s Criminal and Legal Ordeal

On this website we will chronicle the impact that Tom Dillard has made on the lives of those he’s come into contact with through various criminal investigations, either as a sanctioned and sworn-in law enforcement officer in his capacity as a homicide detective with the Las Vegas Metro PD, or on his own as a licensed private investigator.

Let’s start with the life of Howard L. Haupt, and how he unfortunately was targeted by Tom Dillard, who at the time was a Metro homicide detective.

Howard Haupt was a quiet man living a quiet life in the San Diego area before he suddenly found himself accused of kidnapping and killing a 7-year-old boy. Imagine how dramatically that would affect your life — having to fight those charges.

Tom Dillard was at the center of it all. He and his partner, detective Robert Leonard, also with Las Vegas Metro PD, spent weeks looking for the evidence that would pin the murder of the boy on Haupt. Haupt was registered as a guest at the resort hotel during the time that Alexander Harris, 7, was there. Check. He loosely fit the often changing description of a man witnesses saw with Alexander at about the time the abduction would have taken place. Check. He owned a tan jacket, also fitting a description given by some witnesses who said they saw a man in a tan jacket leaving with a boy. Check. He had a somewhat stoic, unemotional reaction when confronted as being suspected of committing the crime. Hmmm. Check.

Yet after  all the testimony was collected by people who thought they saw Haupt with the boy, after all the evidence, time and effort that Dillard and Leonard spent trying to put fit the puzzle pieces together to ensure the final picture showed Howard Haupt as the perpetrator of the crime, Haupt was found not guilty on all counts. Turns out, Haupt was just a victim of circumstances. Nearly half a million dollars in legal and court costs later, after spending years in the public eye as the accused abductor and murderer of a  young boy in a very high-profile case, after spending time in jail, after presenting eight witnesses who provided alibis for him, we see that Haupt happened to be in the wrong place at the wrong time. He happened to be a registered guest at the casino at the same time the kidnapping and killing occurred, but that was about it.

It was a long, arduous and costly process to reach that not guilty verdict.

For months before his arrest, the police and the FBI investigated Haupt. The FBI staked out his home; they followed him as he drove around the San Diego area; they checked him out at his place of employment, even going so far as to arrange “tours” of where he worked so they could take potential eyewitnesses through his work space to see if they could  identify him.

And then one day, as Haupt was leaving work, an FBI agent confronted him in the parking lot and asked him to come into their San Diego headquarters for questioning. Haupt anticipated a short visit because he had heard of the case and the investigation and thought it wouldn’t take long to show the police he didn’t have anything to do with it. He had voluntarily contacted authorities after he received a letter (two, letters, actually; the first one he ignored because he figured since he didn’t know anything about the murder and it didn’t require a response he didn’t need to talk to the police; the second one he responded to because there was a note requesting his response — by the way, he was the only potential suspect to receive such a letter) asking him to contact them about what he knew about the crime.

Well, when he got to the FBI offices, driven there by an FBI agent, he saw his other vehicle, a pickup truck, parked there. It was then that Haupt thought that this whole thing might end up worse than he imagined. Then he was led into a room that was filled with files — three-ring binders with his name on it, blown-up photos of him and his house. Then he was led into another room and met Las Vegas Metro detectives Tom Dillard and Robert Leonard for the first time. And the questioning began. Four hours of questioning. And even though he answered their questions patiently, and never waivered in the details of his responses, then they arrested him. His bail was set at two million dollars. That was Feb. 19, 1988, almost two months after 7-year-old Alexander was found.

Ten days later, after an arraignment hearing, Haupt’s bail was reduced to $350,000. He was able to make bail and put up the $350,000 by borrowing from his father, who cashed in his life savings to bail out his son. Over the course of the trial Haupt spent more, well into the six figures, to defend himself. When a conviction could lead to a seat in line on death row, you go to those lengths. When you’re an innocent man, you go to those lengths.

This is just the beginning of Haupt’s story. We’ll detail more about Haupt and other Dillard victims in future updates.