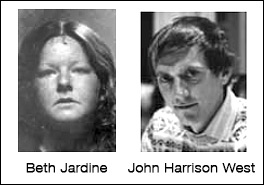 John Harrison West was an unassuming Las Vegas pharmacist. He lived a good, decent life until he was sent into a tailspin with the accusation and charges that he beat to death with a framing hammer Airman Beth Lynn Jardine on June 3, 1985. Jardine was stationed at Nellis Air Force Base, just northeast of Las Vegas.

The murder was a horrific one. West was accused of picking up Jardine in the at the Whiskey Creek Bar on Charleston Boulevard near Nellis Boulevard and taking her back to her apartment, where she was beaten multiple times with a hammer and sodomized her after she was dead. Her nude body with blood and other body tissue splattered all over the apartment was found by maintenance workers. Ripped pants and panties were found at the scene, as well as a bloody claw hammer – the murder weapon — along with large patches of bloodstained carpet and a bloody trail that investigators say showed that Jardine was dragged through the apartment and into a bedroom.

People said that Jardine was “very outgoing, sweet and friendly, and that she often drank alcohol in excess. Jardine’s neighbor, Dennis Lyon, testified that he heard Jardine come home and then heard banging on the night of the murder. Banging, according to him, like cupboard doors being slammed shut.

Crime scene photos showed blood spatters on the apartment’s floor, walls and ceiling. Jardine had been smashed with the hammer more than 20 times in the head, according to testimony from a Clark County medical examiner.

No one heard Jardine cry out or yell for help. She was 23 at the time of her murder.

The chief investigating officer responsible for digging out the facts of what happened and putting a case together to find a suspect and get a conviction was Las Vegas Metro Police Department Detective Tom Dillard.

Dillard built his case, and arrested West later in June. Question is, how did Dillard build his case? What evidence or eyewitness testimony tied West to Jardine and the murder? Certainly there was physical evidence all over the apartment. Certainly there had to be hand or finger prints somewhere – perhaps even everywhere. There had to be eyewitnesses tying West to the Whiskey Creek Bar the night of the murder. Someone had to see West talking with and/or leaving with Jardine. That’s not the sort of thing that goes unnoticed in bars like Whiskey Creek.

Turns out, Dillard largely “framed” his suspect, John Harrison West, to attach an ugly, indelicate, but accurate description to what happened.

John Harrison West spent about a month in jail before being released. He didn’t even make it to trial. Tom Dillard was the person responsible for obtaining evidence, search warrants and charging West. West was publicly accused of the crime, news reports were written and broadcast detailing the crime, and, of course, all this caused John Harrison West’s reputation to be destroyed. In addition to enduring a month in jail, he was held up to ridicule and public contempt, he lost his job, he obviously lost the wages he would have made associated with that employment, to say he was emotionally distressed is an understatement, he lost credit standing as a result, he lost future employability, he was forced to move and bear those costs; essentially, his life was trashed – torn apart and thrown aside in a huge heap.

And Dillard knew or had reason to know that West was innocent. Innocent. As in not guilty of the crime for which he was charged.

What that adds up to, besides ruining a man’s life, was reckless disregard of the truth or the falsification of the truth by Dillard even though he knew or should have known of West’s innocence. West’s Fourth Amendment rights against unreasonable search and seizure were maliciously and willfully violated.

Now, imagine you’re John Harrison West. You’re a trained and respected pharmacist. You help people manage diseases; you help people manage pain; you help people ensure they take appropriate medications in appropriate doses and help ensure that the medications don’t cause adverse affects or interact in a detrimental way. In some cases, you help save people’s lives. Now imagine that you do what you do on a daily basis for years, until you’re arrested and charged with a crime of which you know nothing about except what you heard or read. And not just any crime, a despicable, heinous crime in which a 23-year-old Air Force airman was brutally sexually assaulted and murdered. Can you imagine being that person and having to face people who assumed you were guilty of doing that, since you had been arrested for it? Can you really imagine what that might be like? It’s almost incomprehensible.

Yet that’s the position Tom Dillard put John Harrison West in. Let’s look at some of the facts that became apparent to Dillard during the investigation that would have clearly excluded West as a suspect during the evolving investigation.

Eyewitnesses: In Dillard’s affidavit that supported his request for an arrest warrant was an essential representation, that Dillard swore to under oath, that West was in the Whiskey Creek Bar with Beth Lynn Jardine on the night she was murdered. Yet police reports made by Detective Dillard regarding his earlier interviews with witnesses show that West was not in the tavern that night at all, but rather may have been in the tavern approximately one to two weeks before the killing occurred. What, exactly, is that about? Would Dillard have falsified the affidavit he drew up to show probable cause for arresting West and getting a search warrant?

Not long after the homicide was discovered, the Las Vegas police found several latent prints at the scene of the homicide, which police figured may have been left by the attacker. Also there were identifiable latent prints that police were able to get from Jardine’s car. The police concluded that Beth Lynn Jardine’s car had been stolen by the assailant after her murder and that the prints probably were those of the assailant.

Now, all of these latent prints from the crime scene and car were examined and compared to John Harrison West’s fingerprints. Guess what? Fingerprint experts for the police department concluded that they were not the prints of John Harrison West.

This was information that Metro police had, and which was clearly known to them and Detective Dillard, before any arrest warrant or search warrant was requested or issued. And discovery during the depositions for a civil case brought by West against Dillard and the Las Vegas PD later revealed that this information was available to Dillard and most probably known by him before to he sought an arrest warrant.

Was all this information purposely withheld by Dillard?

The lab that analyzed and compared the evidence reached the conclusion that it was a virtual medical certainty that John Harrison West was not guilty of the rape, sodomy and murder of Beth Lynn Jardine.

When the court received that information, it dismissed the capital murder charges against West. The resulting civil rights case that West brought against Dillard and Las Vegas Metropolitan ultimately was settled out of court. The defendants in the case – Dillard, Metro and other “John and Jane Does” involved with the case paid West $650,000. One of the attorneys representing West in the Case, Pat Horton, was interviewed by the Eugene Register Guard newspaper when he came into the public eye in Oregon when he came out of retirement to work as a deputy district attorney in Oregon’s Deschutes County a few years back.

Quoting from that article:

“Horton became involved in a Nevada case after he was contacted by the Oregon father of an Oregon State University Pharmacy School graduate wrongly arrested for the murder of a female airman at Nellis Air Force Base. Horton represented pharmacist John Harrison West, working with Eugene attorney Jeff Boiler to exonerate West, and later won a $650,000 settlement in his federal lawsuit alleging false arrest. West had been framed by a detective who included what Horton calls ‘knowingly false information’ in a sworn statement to obtain West’s arrest warrant.

‘They tried to adapt and model the physical evidence to conform with their theory of the case,’ Horton said. He noted that Las Vegas Metro Police arrested the real killer of Beth Jardine 22 years later, based on DNA evidence.”

Also, on a bit of an ironic note, on the same day that West’s damage award hit the newspapers and other media in Las Vegas, Howard L. Haupt called Horton. He told him he was very interested in speaking with Horton as Haupt had just been acquitted in his kidnapping and murder case in Las Vegas. And he told Horton he similarly wanted to go after Dillard and Metro, too, for falsifying affidavits and their efforts to try to frame and convict him.

You can read all about Howard Haupt’s ordeal with Dillard here: Haupt Accused of Kidnapping and Murdering 7-Year-Old Boy

Beth Lynn Jardine’s murder had gone unsolved for 22 years before a Las Vegas cold case detective matched DNA recovered from her crime scene with records from a national database in 2007. The DNA matched Charles Reese Conner, who was convicted in 1996 of raping and kidnapping a 10-year-old girl. He was arrested in 2007 in Arkansas and charged with Jardine’s murder. He was tried, convicted and has been in jail since then. He essentially admitted to being the perpetrator.

According to a source vey close to West’s family, John Harrison West “died a broken man.” And the source said the family had two choice words to describe Detective Tom Dillard: “Pure evil.”